Dashboard
How to Sunset a Feature to Drive Engagement

To keep a product healthy, you need to trim features. When you do, off-board users to increase engagement. 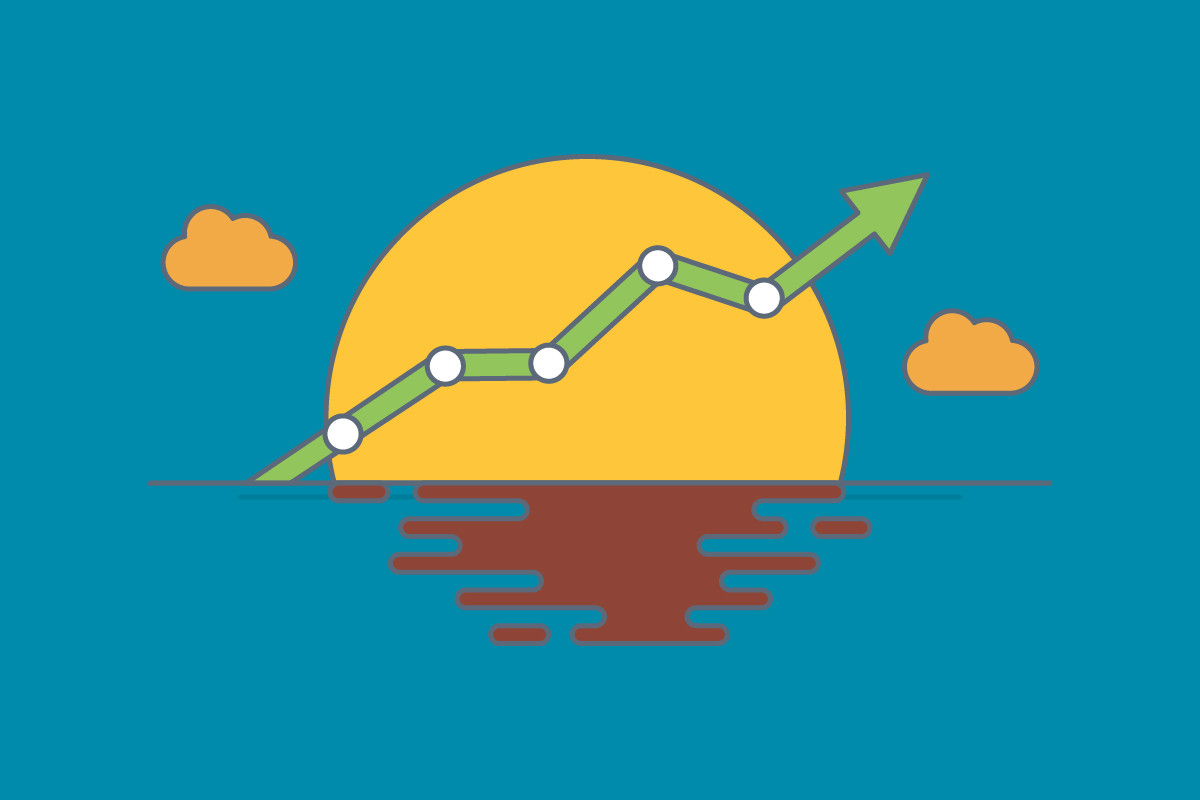 When building great products, sometimes less is more. Removing a feature focuses your team, allows you to prioritize, and spend your team's energy where it's most needed.

But while killing a feature can be great for your product, it can be a nightmare for the people who use it—if it's not handled properly. Done wrong, it can frustrate devoted users and cause them to abandon your product altogether.

When product managers combat this challenge, they often focus on simply softening the blow to ease the transition for users. But in reality, there's a lot of opportunity to deepen engagement when you kill a feature.

If you see usage of a feature dwindle, don't let it just drop off and die. Harness existing engagement with your product and create even greater attachment to your product. Read on to learn how.

Killing a Feature? You Need to Offboard.

The goal of onboarding is to get users to see new value in your product. By doing so, you transition them from one stage of the customer engagement funnel to another.

But when you kill a feature, you destabilize the flow of the customer engagement funnel. You remove some value for certain users, putting them at risk of going backwards in engagement. To combat this, you need to properly offboard them from the feature you're killing. 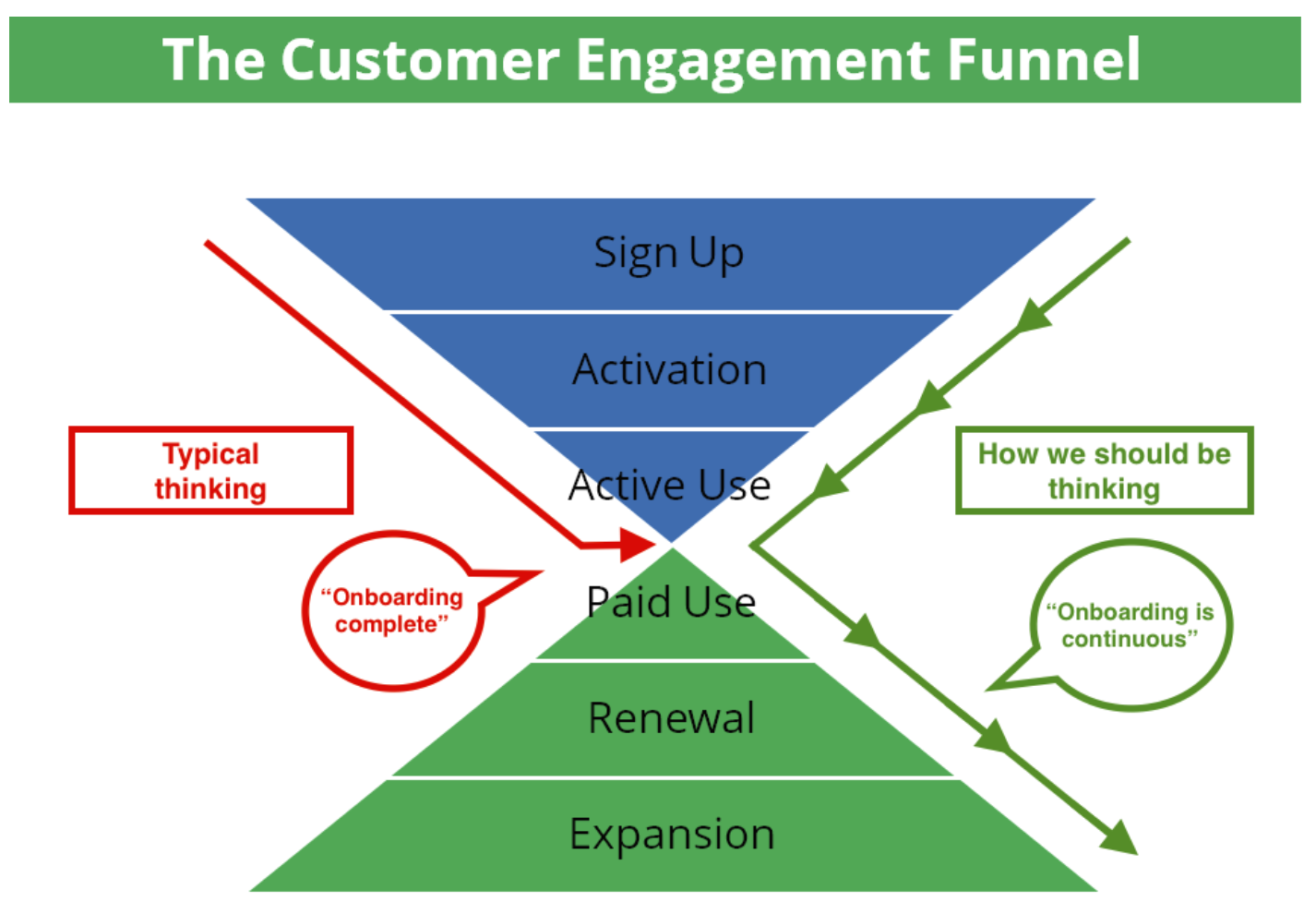 Google Reader, for example, was by no means the most popular Google product. With dwindling or stagnant engagement and a product strategy increasingly focussed on Google+ and social, it was decided to kill the Reader. But existing users didn't understand or appreciate this and vocalized their complaints on Twitter and elsewhere. Devoted users mourned Google Reader's death with literal obituaries.

If the offboarding had been handled better, Google could have used that transitionary moment to transfer Google Reader users' engagement over to Google+ or another product.

The 3 Elements of Great Offboarding

User offboarding uses the same principles of user psychology and communication as user onboarding. The formula for delivering value remains the same: you need to communicate to the right person, in the right channel, with the right content.

Here is a summary of how you might want to engage different types of users through each channel:

If you're killing a feature that had dwindling engagement to begin with, odds are your entire user base isn't going to be upset about the change. A mass email to everyone, or a push notification to anyone with a mobile app, will probably come across as more of a nuisance than a help. You need to segment your users based on how much they use the feature. 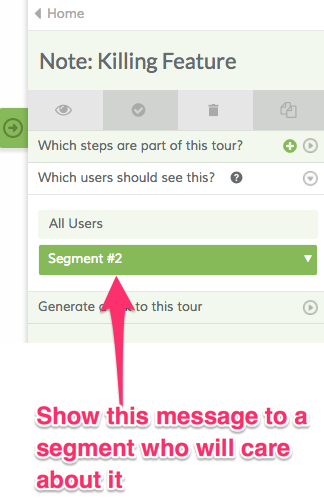 Try targeting users who regularly use the feature with a message explaining the details of why the change, and when it's going to happen. As for the people who have never used it before—or haven't touched it in the past month—you might even try not reaching out at all. Otherwise, you run the risk of reminding people that you're killing a feature they might not even know exists. Not exactly helpful communication.

By tracking user behavior with tools like Chameleon, or other mobile analytics tools, you'll easily be able to target your messaging based on actions that users have taken.

Now that you've determined who you're reaching out to, it's time to think about where you're going to reach them. Selecting a channel strategy for your offboarding messaging is much like selecting one for onboarding messaging; odds are, you'll need more than one channel to get the point across. 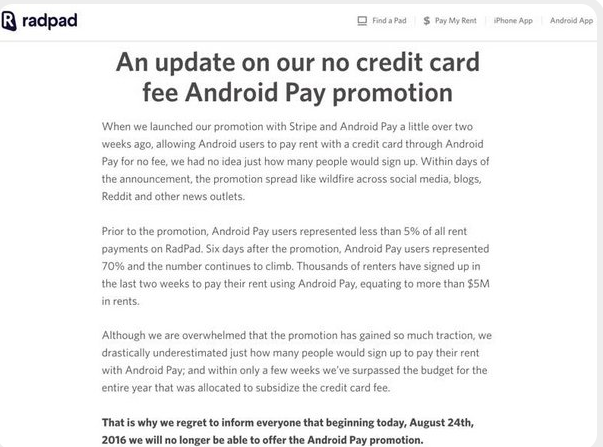 Blog posts like this are great, but not everyone has time to read them. You need other channels in addition!

Now that you've determined the who and the where, it's time to determine the *what. *Saying the “right thing” in these messages can be daunting, since you have a lot of boxes to tick. You need to:

Buffer did this well when they retired their Suggestions feature, which used to help Buffer users find content worth sharing. The post hit all three nails on the head: 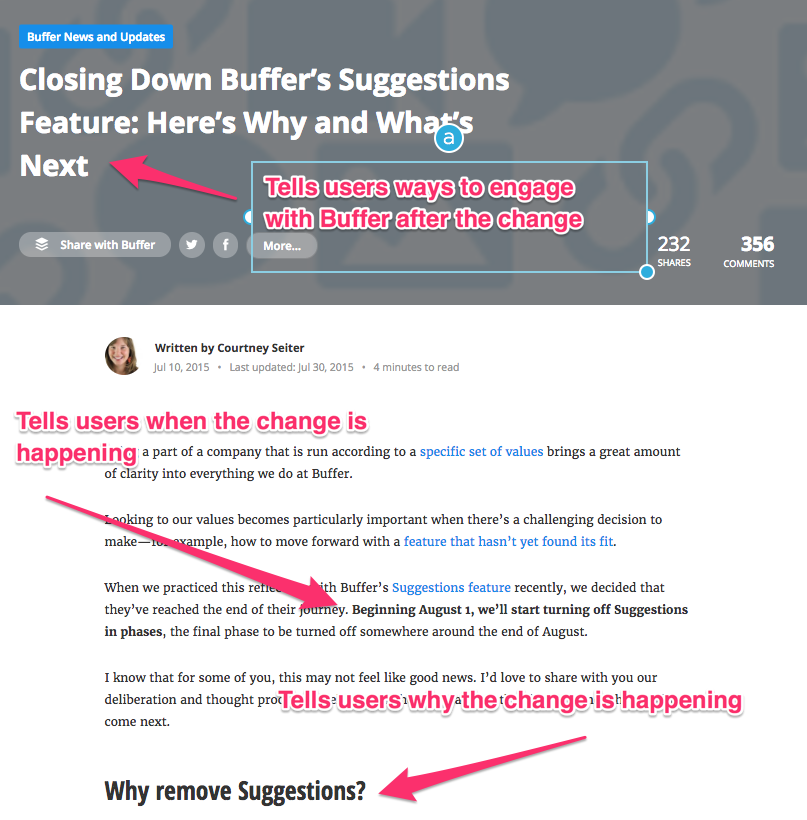 By showing users (with links pointing them to the right place) how to get the same value in other parts of Buffer, people who had previously relied on Suggestions were ushered to try out new parts of the app, and maybe even upgrade if they were ready for it.

Killing a Feature is a Huge Opportunity

In any software company, teams need to make hard decisions that may let down some users. After all, every change breaks someone's workflow.

But sunsetting a feature doesn't have to be cause for mourning. You just need to learn how to offboard devoted users from one feature and onboard them to another. By preparing them for the change and ushering them to find different value in your app before the change happens, you'll be able to not only continue the momentum, but help drive new engagement with old users.

How to Build a Knowledge Base in 6 Steps [+ Examples]

A knowledge base gives users the power to become self-sufficient, maximizing your CS team’s productivity. Build one that helps users succeed more quickly with your product.

Product adoption rate shows how well users are embracing your product to accomplish their goals. Track it with these 10 key metrics.