Learn the latest product marketing trends and tactics from leaders at CXL, Klue, and Olivine 🔥 Save your seat

How Mixpanel increases customer retention and satisfaction with Chameleon

How Mixpanel achieved a 4% increase in customer retention using Tours

🤔 Challenge: How can a B2B product analytics solution improve their user experience for new users and existing customers while avoiding friction and customer frustration?

🏆 Outcome: A 4% increase in customer retention and a 3x increase in their Net Promoter Score, aided by in-product messages.

Mixpanel is a product analytics company with offices around the world—from San Francisco to Singapore. Since the company was founded in 2009, Mixpanel has gone on to raise over $77 million in funding and is making waves in the analytics sector. With over 26,000 customers across the globe (and 10.5 trillion user events sent every year!), Mixpanel helps everyone from the smallest startups to the largest enterprises drive data-informed innovation.

As the company looked forward to making important design changes and launching new features, they needed a self-serve onboarding solution that would allow them to communicate product updates to their users as they developed new features and implemented UI changes.

Finding the right onboarding tool to grow with

Previously, Mixpanel was using WalkMe for their onboarding efforts, however, they encountered issues with performance, bugs, and the UX. Mixpanel needed a flexible, high-performing solution that would aid them in their goal of delighting customers. While WalkMe had at one time worked for them, as they looked to improve their platform and make huge changes to the design, they needed a reliable and engaging onboarding tool that would empower them to target the right users at the right time.

Initially, the product team was met with internal pushback as there was concern around how many resources would be invested into transitioning to a new tool and if they would find themselves in the same position but with a different software down the line. Their initial use case was change management, with the goal of improving consistency in the product—which Vlado Hruda, Staff Product Manager, was working on.

We needed a tool that would provide results and that wouldn’t have performance issues. Ultimately, we were looking for a tool for the long-haul.

Mixpanel considered other onboarding platforms, but chose Chameleon as their partner in success due to the support for their tech stack (Chameleon supports shadow DOMs which was a must from Mixpanel team), the support from the Chameleon team, and the impressive results seen in their trial period (a 258% increase in views per day to an updated feature, driven by one Tour). They were confident that this was a tool they could grow with, and that Chameleon would be a partner in success.

Communicating change to hundreds of thousands of users

There’s no way to sugarcoat it – users hate change. Whether they’ve been using a tool for a few weeks or years, the friction caused by a UI update is something that needs to be carefully considered to avoid frustration, or worse, churn.

Mixpanel made huge changes in their customer-facing dashboard to improve the data analysis experience. While these changes were for the best, customers were struggling to adopt the new layout.

We made a huge change to the product and users were struggling with the updates—they weren’t happy. 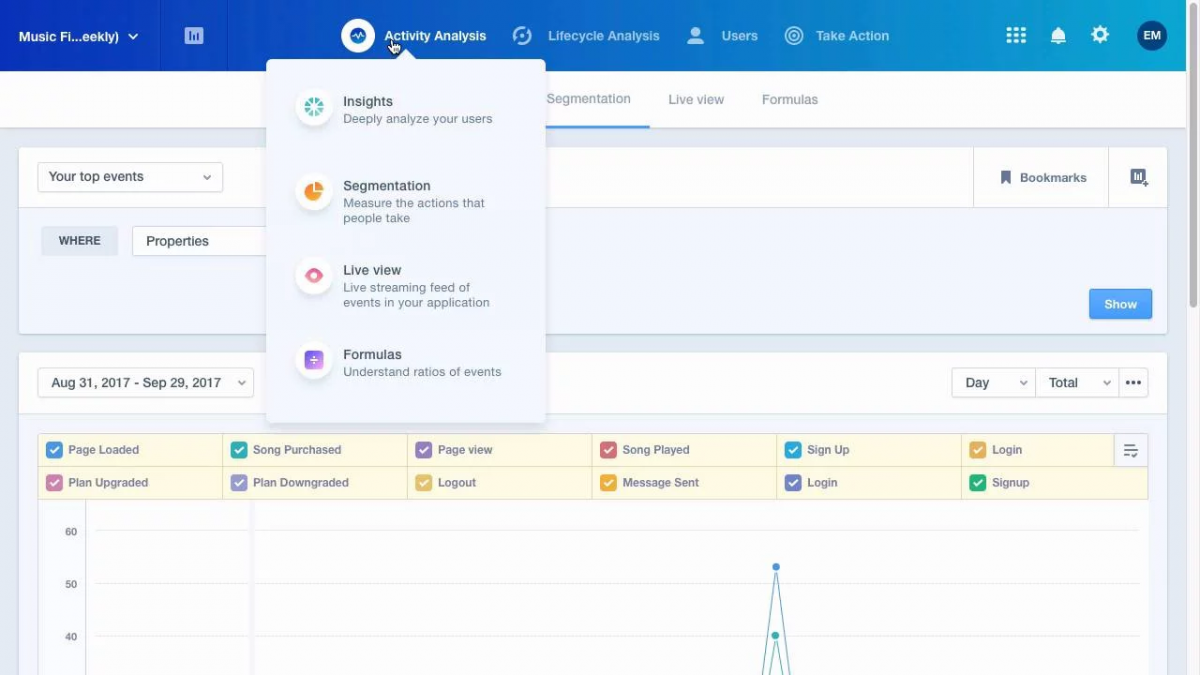 Mixpanel needed an effective way to onboard new and existing users to the updated design to avoid user frustration. They needed a tool that had high completion rates so they could release changes, confidently knowing that users would be shown what had been changed.

Chameleon Tours composed of Tooltips and Modals were used to quickly show users around UI updates and help them learn where their most-loved features now lived, forming new habits for users. Mixpanel’s product tours have a 56% completion rate, whereas previously with WalkMe, they were seeing a 10% average completion rate. 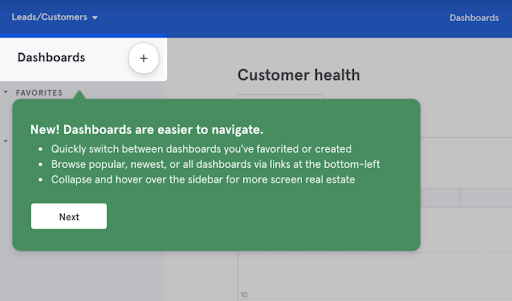 We’re changing the product under users’ feet—which can be frustrating for them. With Chameleon, we can guide existing customers through updates and keep them happy, it’s an essential tool for us.

The new and improved UI of the tool

Adding videos to your product tours increases time spent on the tour by 9%. Users are delighted when they’re met with a video that walks them through changes and sets them up for success, rather than taking the time to read a long help doc. 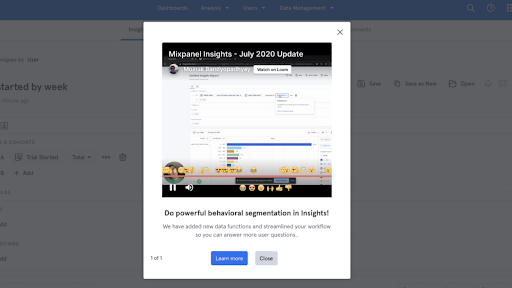 Mixpanel uses embedded Loom videos in their Tours for two reasons. Firstly, Loom shows users how long they will need to spend watching the video. They set expectations of how long it will take to learn about the new features. Secondly, the social proof element of Loom intrigues users to see what’s behind all those heart-eye emojis! With Chameleon, you can easily embed media and videos into your Experiences, learn how to do it here.

We launch 1-2 step Tours with embedded Loom videos and text. Users who are deeply engaged with these feature updates can digest essential information in under two minutes.

💡 Chameleon Tip: A three-step Tour is 38% more likely to be completed than a six-step Tour. Experiment with breaking down longer flows into multiple Tours that are triggered by specified user actions. Get more insights from our Benchmark Report.

The Chameleon impact on retention and NPS

Customer-centricity is more than saying you put the customer first. It means making decisions that always consider the customer – whether that’s sunsetting a feature, or building a whole new UI. And the best way to measure the results of your hard work is by looking at the impact it’s had on retention and customer satisfaction.

Mixpanel measured the results of using Chameleon by dividing their users into two customer cohorts; one had seen and interacted with Chameleon Experiences, and the other had not at all. The cohort that had been served Chameleon Tours had a 4% increased retention rate over one year. This is monumental when you think that these users went on to invite other team members, it creates a rolling effect on retention. 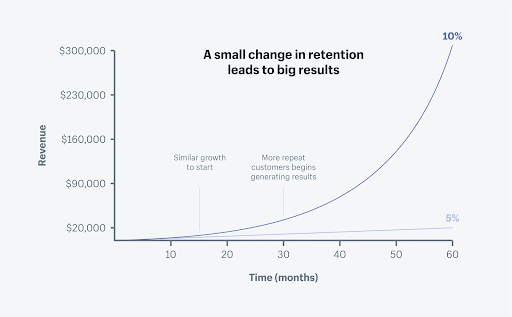 On top of improving customer retention, Mixpanel has 3x-ed their Net Promoter Score over 16 months – with help from Chameleon’s in-product Experiences as well as their customer-centric mindset and stellar team. Targeted in-product messaging has helped to reduce support tickets and emails so that their customer success team can focus on helping users shine, rather than responding to messages asking where features have gone or how to use the updated product.

The number of negative emails, tweets, and support messages has dwindled and instead, we’ve seen a great increase in messages from happy customers since using Chameleon.

A data-driven approach to onboarding

Mixpanel closely monitors their Chameleon Tours performance thanks to the direct Mixpanel and Chameleon integration. This integration enables you to leverage your Mixpanel cohorts inside Chameleon then target users within these cohorts with specific in-product experiences built with Chameleon. You can then see how your in-product experiences perform using Mixpanel and automatically see all data related to your Chameleon Experiences inside Mixpanel, including A/B test data formatted for Mixpanel Experiments reports. Learn how to set it up.

Mixpanel keeps a close eye on the performance rates of their tours with alerts. Whenever a Tour’s start or completion rates drop below a certain benchmark, an alert is triggered to notify the team, who then iterate on the copy, design, or targeting of the Experience—always striving to provide the best user experience.

The future with Chameleon

Chameleon has been an essential tool for Mixpanel – from rolling out product updates to improving customer satisfaction, and they’re excited about the future together. As Mixpanel is a Growth plan customer, they benefited from a customized implementation plan and their team has priority access to Chameleon’s customer support.

I love having a relationship with the Chameleon team. Being able to discuss ideas with them and contribute to the roadmap is a huge benefit.

Mixpanel plans to expand on the use-cases they’ve already established and continue to use Chameleon for change management. They are looking forward to enabling further self-service within their product and increasing adoption rates further with Chameleon.

Chameleon is a must-have tool for us – the ROI just makes sense!